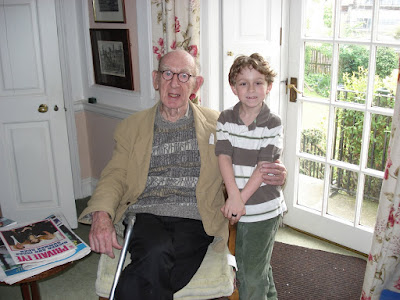 I learned a lot today about an old friend.

Ian McCallum was born into a privileged family in 1920, and spent the rest of his life serving people who weren’t as fortunate as he had been. He was a physician and worked in wards that served victims of Blitz during WWII, and because of his work he contracted tuberculosis. As a result he spent his career in occupational medicine, researching the illnesses of the lungs that strike working people, while developing preventions and cures for keeping them from getting sick in the first place. He wrote some of the seminal literature on lead poisoning and the 'bends', saving the lives of countless workers in the industries of Northern England. Several of his textbooks are still in use. Along the way he was a husband and father, a church elder and a teacher of Scottish country dancing. He was an expert gardener, maintaining a patch of rare and beautiful flowers at his house in the Canongate section of Edinburgh’s city center. He was (quietly) proud of the fact that he had published a peer-reviewed journal article in every single year after his retirement (there are active professors who can’t touch that publishing pace). He was known as an expert in the history of alchemy, and compiled a catalogue of Scottish silver hallmarking…simply because it interested him.

Ian McCallum was one of those people I feel lucky just to have met. That he was my friend is one of the true blessings in my life.

I went up to Edinburgh to attend Ian’s funeral this week. Some of you will know that I served as an assistant minister at St. Giles’ Cathedral in Edinburgh back in 1992-93. I lived in a church-owned flat in the Royal Mile—it’s still one of the great formative experiences of my life. After I’d been there a few weeks, a couple came up to me in church and invited me over for lunch. Ian and Jean McCallum, I later learned, had made a habit of taking the visiting assistant ministers under their wing, and on that Sunday it was my turn. They pretty much adopted me while I lived in Edinburgh, having me over for meals, helping with laundry, introducing me to their friends, and even taking me away to their country house a few times. I remember going with him to Pitlochry, near their vacation home, to buy the morning papers, which we read together and chatted about between breakfast and lunch each day. When I had my kilt made it was Ian who insisted that I could not leave Scotland unless I walked the Royal Mile in my Scottish gear. So he came with me, dressed in his own Highland kit, and we walked together up and down the main street in town.

We stayed friends over the years. Ian and Jean came to visit in California not too long after Julie and I got married, and they clearly enjoyed getting to know her. When I started the Ph.D. program at the University of Stirling in Scotland, visits to Ian and Jean became annual events. They were such a funny, loving couple. If they disagreed about something Ian would look at Jean and call her a ‘dreadful woman,’ and she would immediately respond by calling him a ‘horrible old man.’ Then they would giggle, and somewhere in the laughter they would forget what they had been arguing about and move on to something else.

One of my favorite visits to their home was one that I made by myself. Julie was pregnant and didn’t want to travel, and so I dropped in on the McCallums, armed with a sonogram image of our not-yet-born son. I remember handing the picture to Ian and saying: “Ian, meet Ian.” He was genuinely moved, and over the next few years he was so gracious to our Ian—reading him stories and walking him around the amazing garden he tended in the middle of Edinburgh. That’s a picture of them together above, in Ian and Jean’s home in Edinburgh. Only the Parkinson’s disease that was diagnosed in the last few years kept him from doing all the things he wanted to accomplish. It was from Parkinson’s related complications that he died last week.

So this week I was back in Edinburgh, back in St. Giles’ and back in Ian and Jean’s home. Edinburgh, for all its rich history and architecture and beauty, is a little emptier now. But as I head back to my home in London it occurs to me that so much of what I know about hospitality and generosity, I learned in the McCallum home. In that simple way, Ian lives on with us as Julie and I reach out to other people and invite them in for a meal.