Saying Goodbye to a Friend 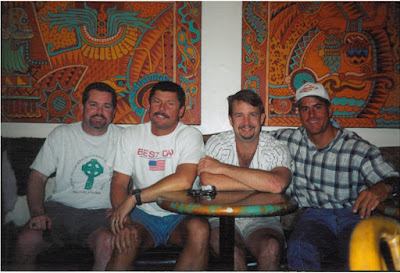 I’m back in California this week, seeing family, reconnecting with people, and saying goodbye to a friend I’ve known my whole life. There were four of us boys, among some other great friends who grew up at First Presbyterian Church in Burbank, who stayed connected over the last 40 years or so. The four of us played baseball together, went to church camps and conferences together, and over the years supported, participated in and disrupted a generation of youth ministry at the church where we were raised. Some of the stories you’ve heard, and others aren’t really fit to print here. But through all of it, Shane Sindle, Earl Bryant, John Harmon and I developed friendships that shaped us as kids and which continue to influence us in our adult years. My childhood and adolescence are unrecognizable without John, Shane and Earl in the background (probably laughing about something), and it occurs to me that virtually everything I learned about Jesus as a kid I learned with those guys at my side.

The four of us had and have lots of other friends, but there was something special about our relationship that became even more so over the years. Once we got into our 40s we saw a new value or preciousness to the fact that we’d been together so long. It was clear we would do anything for each other, and even better, we began to go out of our way to make sure the others knew it. In the movie “Stand By Me” the narrator says: “It happens sometimes. Friends come in and out of our lives, like busboys in a restaurant.” In my friendships with John, Shane and Earl it was more like friends who entered into each other’s lives and then sat down and stayed for a long meal.

John died last week and the rest of us are trying to make some sort of sense of it. There isn’t any big answer to John’s loss, of course, but it’s important to wrestle with the questions. John was a complicated guy. Funny, gentle, charming, and almost childlike on the one hand, while on the other he struggled with depression and grief, and could never really escape the temptation to numb both of those with an assortment of drugs. Now the rest of us are thinking back to signals missed and clues overlooked, but the answer is, very honestly, that John wasn’t the type to reach out easily for himself. Just once in the 40+ years that I knew him did he call me and ask for help. He’d gotten himself in to a pattern of using that had destroyed his finances, his relationship, and was taking its toll on his body. My wife and I drove up to see him in Santa Barbara 13 years ago or so. We didn’t solve much, but it was a reminder to both John and myself that we’d do anything we could to help the other.

We’re left with this moment to begin to say goodbye. I don’t want to be here. I want to be back at my house in London with my family or in my office, thinking about how the four of us were going to get together next summer. I want there to still be one more chance for the four of us to hang out and talk about our lives. Maybe that’s what is giving my grief such an especially intense pain: I can’t imagine a world that John isn’t in. I can’t imagine a world where we won’t have another chance to tell the same old stories and comment on how those stories made us the guys we became.

The service is tomorrow and we’ll gather in the coming days to talk and cry and make plans for getting together in the future. I hope the sadness goes away and I expect it will, mostly, but for Earl and Shane and myself I think there will always be an enormous space among us, a space where John belongs. I believe in the promise of an afterlife, even if I can’t quite wrap my head around what that means. I believe I’ll see John again, whole and strong and filling his days with worship instead of the drugs that ruined him. But even with that hope it breaks my heart that I won’t see him again here, in this beautiful, broken, joy-filled, painful life.

So we say goodbye to John, in the “sure and certain hope of the resurrection,” as the Christian tradition says, though there will be varying degrees of sureness and certainty, I think. I’m looking forward to seeing my friends this week. I just wish they were all here.
Posted by Rev. John A. D'Elia at 7:36 AM No comments: