I suppose there are all sorts of things that make us feel our age. Aches and pains are the most obvious. Having a kid call you 'sir' or ma'am' is a sure winner. The first time you tell someone to turn that $£% music down! I almost cried the first time I said that.

It also comes up in the 'where were you then?' conversations. Our parents all remember where they were when JFK was shot (I was exactly six months old on that day). My generation talks about the Challenger disaster. I suppose younger folks will have Monica Lewinsky, 9/11 and other terror events to think back on.

Television programming can put distance between the generations as quickly as anything. From Sid Caesar to Ernie Kovacs in the 50s, to Hogan’s Heroes and Batman in the 60s, to Welcome Back Kotter and That’s Incredible in the 70s, to Dallas and Hill Street Blues in the 80s, to Seinfeld and Friends in the 90s, and so on (can’t believe I didn’t squeeze NYPD Blue and the Sopranos in there somewhere...).

So I say all this because when we walked into Ian’s classroom back before his first day, here’s what we saw. 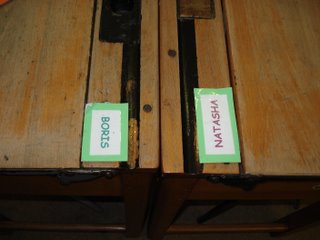 Now of course there's nothing at all funny about the names themselves (they're lovely kids), but Julie and I both laughed out loud at seeing them together. We waited for Ian's teacher to get the reference, but instead she looked at us as though we were, well, just another pair of crazy Americans. Of course, she's in her mid-20s, and had never seen Rocky and Bullwinkle cartoons.

When we were done laughing, we realized just how old we'd become.
Posted by Rev. John A. D'Elia at 1:46 AM